Last weekend, Tom and I took a trip to Newport, RI for a weekend getaway.  Since I just finished my master’s and Tom finally completed his CPA, we REALLY needed a vacation.  As an added bonus, my company lets each employee take off on their birthday.  So, being my birthday was on Saturday, I had a Friday free and a three-day weekend it was! 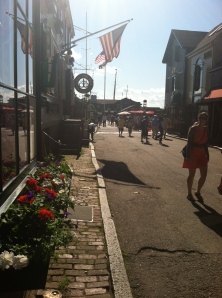 Walking along the water in Newport, RI

We were trying to think of an easy weekend trip that was drivable.  We thought of Cape May but a three hour drive just to end up at the Jersey Shore seemed like a waste.  My sister suggested Newport, RI, where I had never been and then my mom later saw a special on the Today Show for The Attwater, a bed and breakfast in Newport.  When my mom offered to pay for the room as a “graduation present,” I was convinced.  Unfortunately, The Attwater was booked (and so was my other choice, The Mill Street Inn) so we ended up at the cheapest B&B we could find – The Inns on Bellevue.

I’ve never stayed in a B&B and it was exactly as I thought – little old houses that kind of feel like your grandmother decorated the inside. It’s called a “European” hotel, which really just means old and tiny, but I have to say, at $205/night on a weekend in tourist season, it was worth every penny.  It was the best location possible, situated right in the center of the Newport peninsula.  It was easy walking to the west side where all the shops and restaurants are and short trip to the east side where you can tour the famous Cliff Walk. 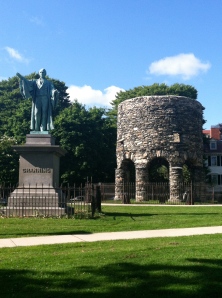 The Old Stone Mill in Touro Park – a piece of history right near our hotel!

The first night we wandered around town and walked to the marina.  It’s exactly what I pictured – a beachy boat town with bits of history ingrained in the city. At night, we tried to find a nice BYOB (we’re huge fans of not paying extra for our wine) but apparently Newport does not believe in BYOBs.   (The only one we could find was Lucia which kindly informed us – as we stood there with our wine – that they recently got a liquor license.)

So, we ended up at Pasta Beach – a modern Italian restaurant near our hotel that had a touch of … well, “beach.”  We had a house red, which of course was delicious, and the Caprese salad.  I had pumpkin ravioli and snuck a few bites of Tom’s gnocchi with gorgonzola cream.  Both were DELICIOUS and worth the long hunt for good Italian.

Don’t worry – we ended up killing the BYOB bottle back at the hotel. 🙂 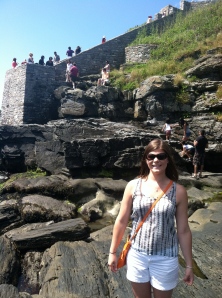 At the bottom of Forty Steps at the Newport Cliff Walk.

Day 2 started with the “breakfast” part of the B&B which was pretty good (a small buffet with pastries and pancakes) and then we headed to the famous Cliff Walk.  Newport is known for this trail that hikes along a cliff full of mansions and it did not disappoint. We started at the Memorial Boulevard entrance and walked about 2 miles (that’s a rough estimate) and even hiked down the “forty steps” that lead to the water.  We walked back up Bellevue Avenue and made a pit stop at Chateaux sur Mer to see this gorgeous mansion from the front.  We turned around when we realized it was about $20 to tour the place.

We then headed a few miles north to Newport Vineyeards for a quick winery tour and tasting for only $10.  It was short and sweet but I recommend bypassing the part where you pay for the “entrance” badge because no one even checked for it!  We did meet a few interested people who suggested some bars in the city.  We took their advice.

After a drink at the Top of Newport rooftab bar (at the fancy Viking Hotel across the street from us) and delicious dinner at Christie’s near the water (and some of the BEST mac n cheese I’ve had in a while) we started at Star Bar – a chill bar above Starbucks (appropriately named) that was described as the perfect place to start or end the night. It was relaxed, with leather couches and pool tables.  After our first drink, we attempted to go to the second bar that was suggested – One Pelham East.  However, with a $10 cover, we quickly turned around and went next door to Studio 3 (free entry until 10:30 p.m.).  It was a great place to drink the night away and watch multiple bachelorettes get “wild” by Newport standards (we’re not in Manhattan anymore!).  I guess I had a rougher night than I thought because I could feel it in the morning! 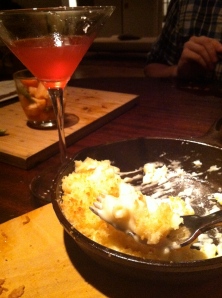 Mac N Cheese and Pomagrita at Christie’s in Newport.

The one thing we did NOT find in Newport (other than a BYOB) was a decent private coffee shop.  I take my coffee seriously and love trying the local private brews.  Unfortunately, three out of three were disappointing.  So on Sunday, before our departure, we took our last stroll along the water with … Starbucks.  Not to mention, the line was out the door so I guess Newport is just not known for their coffee.

Overall, I HIGHLY recommend this city as a weekend getaway.  If you need more suggestions to eat, drink, or shop, I have plenty to last you three days!

I'm a foodie, traveler, and just-for-fun blogger living outside of Manhattan enjoying the food, fun, and chaos that life brings.